And never the twain shall meet?  What about when biology enters the equation, as it does in almost every natural interface between surface and groundwater? That is, in the vadose zone, where plant roots and associated soil ecosystems profoundly influence structure, and which can be much deeper than commonly conceived, being “out of sight, out of mind”. 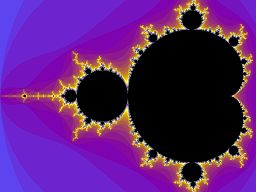 Fractals are generated through
bifurcation (logistically mapped in the image at right),
iteration (below) and
feedback. By NightElfik (Own work) [CC0], via Wikimedia Commons (Public Domain)

Soil ecosystems are cogenerated among roots bifurcating into . . . as they spread through the soil . . .

we have yet to identify as critical to our own needs, but certainly sustaining their own habitat needs by ensuring persistence of the soil ecosystem.

Over time, these roots and soil organisms biogenically create soil structure, including systems of macropores that detain water in its otherwise inexorable call to gravity – the “sponge”.   Such physical forces/ attractions may be best approximated with fractal, or “pre-fractal” approaches.

Niabot, Menger-Schwamm-Reihe, CC BY 3.0
One example is the so-called Menger Sponge, shown above through its first four iterations.  The Menger Sponge has a fractal dimension of 2.74 (Garcia 1991).  In other words, the Menger Sponge has more than two, but fewer than three dimensions, because of all the void space inside. Water flow around an obstacle transits to turbulent wake by aarchiba, released to Public Domain The mathematics of life For the past several decades most hydrological engineers conveniently avoided bio-ecological aspects of the hydrologic cycle, since they would mess up their pretty equations and, after all, these models are simply approximations/ abstractions, right?

The problem is, as a group they forgot that the models represent “approximations” and began accepting them as gospel – the whole truth.  Regulatory and environmental review processes have similarly viewed standard hydrological models  as the final “authority”.

After all, the regulators rarely have the engineering chops to challenge these broadly accepted (reductionist) hydrologic engineering models.  So they defer authority to the engineers, counting on the engineering consultants’ liability insurance to cover any potential mishaps that may arise as a result.

How easily the physical scientists dismissed the pervasive influence of life – including our own – on the phenomena they sought to measure and predict.

The 21st Century emergence of ecohydrology has begun to shift that paradigm.  See Plants in an Ecohydrology Context.

The 19th through early 20th Century bifurcation of hydrologic science into surface vs. groundwater perspectives in the U.S., at least, was fraught with political maneuvering and intrigue, exemplifying how the complexity of human dynamics, arising from human emotions, colors the seemingly most rational of the sciences.

By 1824, Congress had instructed the U.S. Army Corps of Engineers to improve navigable surface waters, so the national focus on surface waters was entrained a century prior to the U.S. Geological Survey’s (USGS) illuminations of groundwater.

Even the California Department of Water Resources (DWR), in its 2017 Draft Water Available for Replenishment report, conveys the impression that the only means of groundwater recharge is via engineered recharge structures – into alluvial aquifers in valley bottoms. Well, OK, it’s true we withdraw more water from alluvial than from bedrock aquifers, but that doesn’t mean surface waters are the only nor best means of recharge.

How does this emphasis on alluvial aquifers demonstrate a surface water bias?

Because alluvial aquifers are formed through deposition and sorting of sediments by surface waters – over centuries/ millennia. The surface water bias can relate to that.

Yet, it has been clear since USGS first began to document the nation’s groundwater resources in the 1920s, that aquifers also exist within fractured and otherwise porous bedrock formations.
If that were not the case, how otherwise to account for springs and artesian wells? Surely most California mountain residents relying on private wells are tapping into bedrock aquifers – not the alluvial aquifers drawing all the attention from the groundwater resources crowd, including DWR, in the context of the Sustainable Groundwater Management Act.

To understand how porous seemingly solid bedrock can be, one must comprehend the complex dynamic geologic upheaval involved in creating and sculpting mountains over geologic timescales, which are, themselves, nearly beyond our grasp.

Even in our own time frame, the daily frequency of documented California earthquakes (most low on the Richter scale), reported by some news outlets, should remind us that even bedrock is seldom static.

Bedrock fractures and interstices caused by seismic and other disturbances become part of the groundwater system – fed by rainfall infiltration and percolation on watershed/ catchment uplands, as well as riparian zones, thence flowing to alluvial aquifers, baseflows, ultimately to the ocean and hydrologic cycling back into the atmosphere. The above images illustrate the traditional and an updated view of this hydrological cycling, though only the first, USGS diagram on left, alludes to vadose zone functions in its “infiltration” label.

Aside from seismic and other physical fracturing, most rocks absorb moisture into interstices among grains.  If one is outside when it rains, or at the shoreline, one may readily observe how sandstones, limestones, even granite and its igneous variations, absorb moisture from their environments.

So the fact that the prevailing hydrologic paradigm, in California, at least, fails to connect the dots among bedrock and alluvial aquifers –

Once the brain has decided on a solution, it takes an awful lot of evidence to shake it. Our perception is actually influenced greatly by what we believe, where some cognitive scientists take it so far as to state that reality is a shared hallucination,” Malmquist said. “Confirmation bias is one of those factors that is very challenging to see or predict prospectively, but extremely obvious in hindsight.” Any respectable portrayal of the hydrologic cycle illustrates evaporation from the oceans leading to precipitation over the continents.  But many, despite using block diagram formats like the one on left, do not convey the truth of infiltration and percolation on watershed uplands, through their vadose zones, to groundwater. Instead, the vast majority of diagrams currently available online tend to suggest that watersheds indeed only shed water, implying that precipitation hitting the ground surface is automatically, immediately transferred to surface runoff, thence to surface waters, from whence all our groundwater resources supposedly hail.

They are missing the HUGE, subterranean [out of sight, out of mind] component of the holistic hydrologic cycle – the one we may most readily influence by restoring the infiltration and percolation functions of historically degraded vadose zones. See Stream Networks vs Watersheds/ Catchments

Thus far we’ve emphasized the catchment aspects of surface-groundwater interactions because those are the functions most overlooked among the water resources crowd.  Downstream of catchment functions lie baseflow interactions, which, thanks to the Sustainable Groundwater Management Act, are enjoying greater attention.  Baseflow augmentation is the founding paradigm of Rainfall to Groundwater, as  discussed on Surface Water Diversions vs Baseflow Augmentation.

The below diagram offers a synopsis of surface-groundwater interactions.  Please see blog post #10 How Does Groundwater Get There? Some Basics. for further considerations using this diagram. 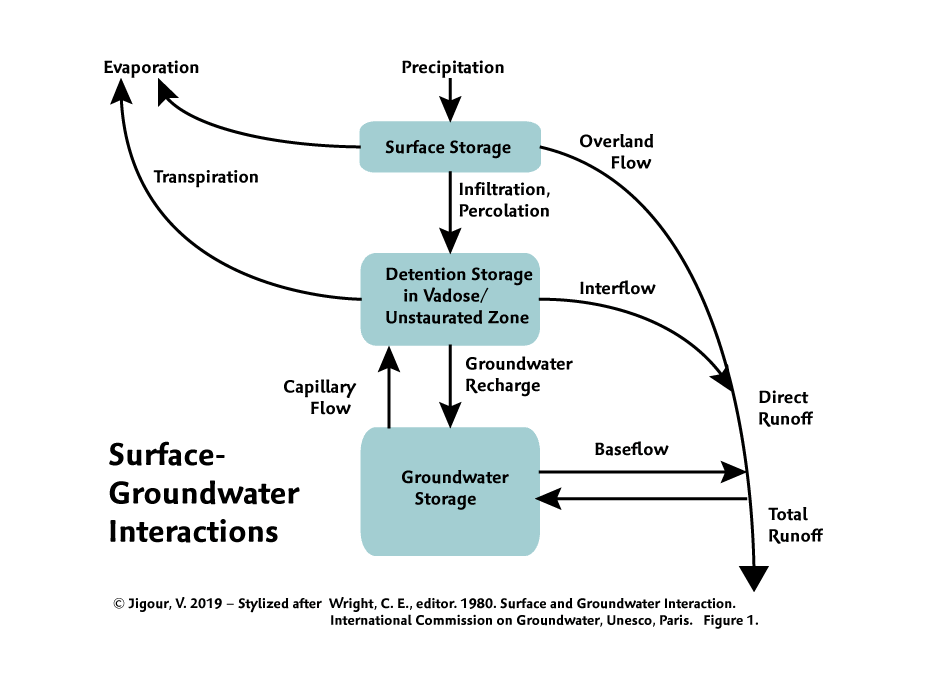